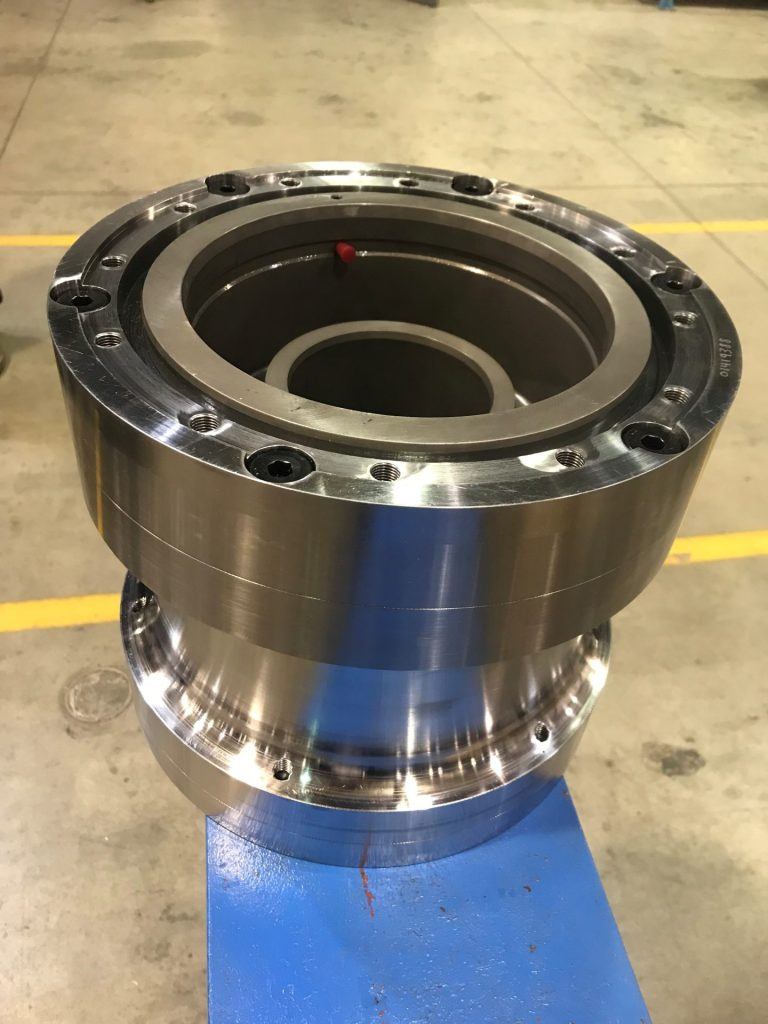 In 1985 we sold a rotary Bear-Loc® by York Precision Machining & Hydraulics (then known as York Industries) to a customer for use in equipment called a flying shear.  The purpose of the flying shear was to cut material coming off a roll.  The drive train consists of an electric motor driving the flying shear through a flexible coupling.   But there was a curious additional need required in this drive train.

The flying shear needs to be rotationally disconnected from its driver.  This must be done quickly and accurately and then the shafts must be quickly reconnected at the correct “clocked” position of the shafts.

This machine, approximately 35 years old was being rebuilt/reconditioned in Europe for continued use.  The company using the machine approached Coupling Corporation of America (CCA), a York, PA based company, to either rebuild or supply new the complete original drive train.  Fortunately, CCA had original drawings and design features of the drive train and immediately recognized the rotary Bear-Loc® and was familiar with its design and features.  CCA came to York Precision knowing this was their proprietary product. They also have the knowledge and expertise for to integrate with other components, in this case, the CCA Flexxor coupling.

CCA President Jim H. Anderson Jr. provided this recap of the rotary The Bear-Loc® in this application:

“The Bear-Loc® provides specific features which apply perfectly for this installation. The rotary Bear-Loc® is designed to release at the instantaneous application of hydraulic pressure which allows the motor and or the shear to rotate independently from the other.  This rotation is smooth, on bearings in the Bear-Loc® and without friction.  When hydraulic oil pressure is released, the Bear-Loc® grabs the shaft again and torque is transmitted between the drive and the shear.

“One can only imagine the additional possible applications of the Bear-Loc® features, such as rolling applications (paper, metal, or fabric handling), also potentially testing, automotive, power and petro-chemical applications.  There are many mechanical drive applications which for one reason or another desire a “shear pin” safety feature.  Where a drive can have multiple over torque occurrences, it would be desirable to utilize a Bear-Loc® which permits multiple events rather than needing to continually replace shear pins.

“The hydraulic release and timing feature can be utilized in those drive train systems where for instance two gear type rotors need to mesh perfectly.  Often these drives are designed requiring keyways to be machined on shafts after the lobed gears are rotated into position.  Cutting keyways to time lobed gears is not too accurate.  The Bear-Loc® can much more accurately offer this rotational “timing” feature where the two meshing gears need to be quickly and precisely “timed.”

“Cooperation between York Precision and Coupling Corporation was excellent.  York Precision completed their part of the project with an excellent product, and on time.  CCA will certainly look forward to additional applications of the Rotary or Axial Bear-Loc® devices in conjunction with CCA projects.”

Bear-Loc® is suited for linear and rotary locking applications in both tie rod and mill type constructions. It is custom designed and available as a locking actuator system, or lock-only unit, for new designs or retrofitting, whether in line or parallel. Bear-Loc® is available in a wide array of mounting options.

Posted in Rotary and tagged Rotary