Mechanical systems in roller coasters keep riders safe and having a good time, so choosing the right one for your ride is an important decision. Different types of systems launch train cars, allow them to stop and control other safety equipment. You need a system that will function safely and effectively in the ride design.

To choose what mechanism will work best in your ride, it's helpful to understand the role of hydraulic systems in a roller coaster as well as the other systems out there and how they function. It also helps to know the other parts of a roller coaster and how it works as a whole.

How Do Roller Coasters Work?

The simple answer to how roller coasters work — physics. Along with some mechanical systems, of course. Typically, once a roller coaster is launched, certain forces keep it moving, like:

Engineers must harness these forces in safe ways. A roller coaster will maintain speed or accelerate down hills and around curves depending on its design. Going up hills decreases the speed, making for fluctuating acceleration. These fluctuations can make a ride both exciting and safer since the car shouldn't pass certain speeds while heading into turns or hills. In those cases, the design is crucial, but so are particular parts of a roller coaster. Certain parts of a roller coaster function to keep riders safe on their journey.

Parts of a Roller Coaster

The construction of a roller coaster can vary depending on what type it is. There are steel and wooden roller coasters that feature different elements throughout the ride, depending on the design. Inverted or suspended rides have the car riding below the tracks, which requires a different type of train and harness setup. These various roller coaster designs still rely on physics and mechanical systems to keep them moving.

Under the train car and the track, roller coasters are complex mechanical systems. The car relies on other equipment and forces to keep it moving since it doesn't have its own engine. Those parts of a roller coaster include:

Many components we've listed above serve to keep riders safe, but passengers don't interact with those components. Instead, they see safety features like harnesses and seat belts. These keep riders secure in their seats at launch, throughout the journey and until it's time to exit the ride.

The restraint bars on a roller coaster keep riders secure. Whether they are lap or shoulder bars, they need a reliable mechanism to lock them in place and unlock them once the ride is over. Roller coaster safety features may use:

These systems lower and raise safety bars, so they must function well, no matter how many safety mechanisms a roller coaster uses. Depending on the construction of the ride, a car may have multiple security devices. Roller coasters with extreme twists and turns or upside-down loops require more secure harnesses. If there is any risk that lifts riders out of their seat, shoulder harnesses are the right choice. A ride will also need secure harnesses and bars if a roller coaster has a rapid and powerful launch. 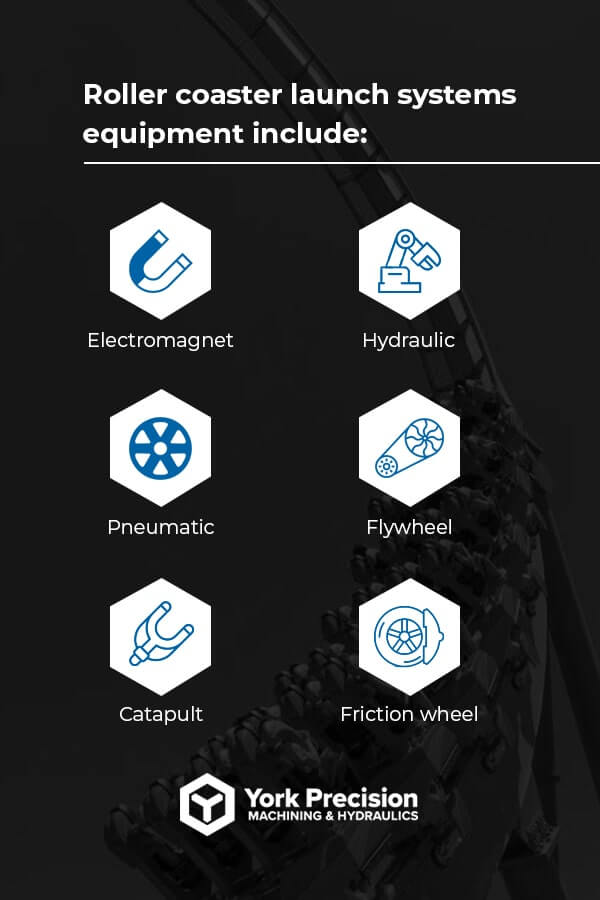 It's one of the most thrilling parts of a roller coaster ride — the launch. Launch systems give riders a boost before the rest of their exciting journey. There isn't just one type of roller coaster launch system because different rides require different launch equipment. The right system for a given coaster depends on how fast the ride launches passengers, the amount of space there is for the equipment and other factors. Different types of launch equipment include:

The type of system describes the mechanical process or component that launches the train car. Every system operates differently with varying results. The last three systems — flywheel, catapult and friction wheel— are the least common varieties of roller coaster launch systems. They are less common choices because they tend to use more energy than the other three options. They also work in different ways:

These various systems use physics in different ways to get roller coasters moving. Roller coaster engineers do not use them as often as other varieties because they do not produce as much power. The power that they do create is not considered efficient either because they require a lot of energy to operate. The ratio between the power they need and what they provide does not make them the best roller coaster systems out there.

The three more popular launch systems use forces and equipment that are a bit more complex. Narrow down your choices by comparing pneumatic, hydraulic and electromagnetic roller coaster launch systems.

The most common launch systems are popular for a reason. They each come with their own strengths but, as with any mechanical system, there are the occasional drawbacks. Certain varieties within these different launch mechanism categories have their positives and negatives.

As we've described above, an electromagnetic system uses forces of repulsion and attraction to launch a roller coaster. There are two different options under this category:

Either variety of electromagnetic propulsion will produce a smooth launch. But no matter which electromagnetic system you choose, you'll need a lot of energy to run them. Variations between pneumatic and hydraulic mechanisms depend on where you get your equipment.

Learn More About Our Bear-Loc

How to Choose the Best System for a Roller Coaster

All of the systems above can be responsible for keeping riders safe, but you have to choose the best one for the ride. When selecting a system for a roller coaster, consider:

While passengers' safety is the top priority, it's not the only consideration when designing, updating or repairing a roller coaster. Think about the longevity of the product you choose and potential future repairs or replacements. Will the system you select always work for the ride? Will it be in the budget to conduct major repairs or replacements?

If you choose the right system, you'll realize a high-quality product is the answer to how to prevent roller coaster accidents. Installing the right mechanism on a ride will make it exciting and safe for passengers.

For faster, smoother and quieter acceleration, a hydraulic system may be your best option. Once you've chosen the type of system, you should also carefully consider the provider.

Selecting the right manufacturer for your machinery will help you avoid hydraulic cylinder failure. The main issue with particular hydraulic systems is the number of moving parts they require. More moving parts in a mechanism means:

You can ensure that you avoid these issues with proper maintenance. Without it, you could experience problems caused by:

Hydraulic components will be the best choice for your roller coaster, whether you use them in launch or safety systems. You also have to make the right choice when choosing a particular hydraulic mechanism and locking components.

With a custom hydraulic cylinder and actuator from York Precision Machining & Hydraulics, your workers and park guests will be safer. Since the actuator controls the movement of a system, you want the best in the industry. Your riders will be safe at launch or other parts of their journey where you use our systems according to specifications.

Our Bear-Loc® locking feature for hydraulic components combines fail-safe reliability with an easy-to-use system. We offer a variety of custom configurations that suit any application's needs with high stiffness and zero backlash. Our high-quality parts are versatile and can even be used in confined spaces. With Bear-Loc® systems in place, passengers will experience an exciting and safe ride.

When you choose a hydraulic system for roller coasters, riders' safety is the top priority. We understand the risk of accidents on any machinery that requires a hydraulic system, and we want to provide the safest option for engineers. When operated according to specifications, our hydraulic actuators and cylinders keep riders and workers safe. If pressure is lost or removed, the Bear-Loc® locks in place, preventing harm to anyone near the system. We work hard to create a system with unique fail-safe properties to ensure secure operation. 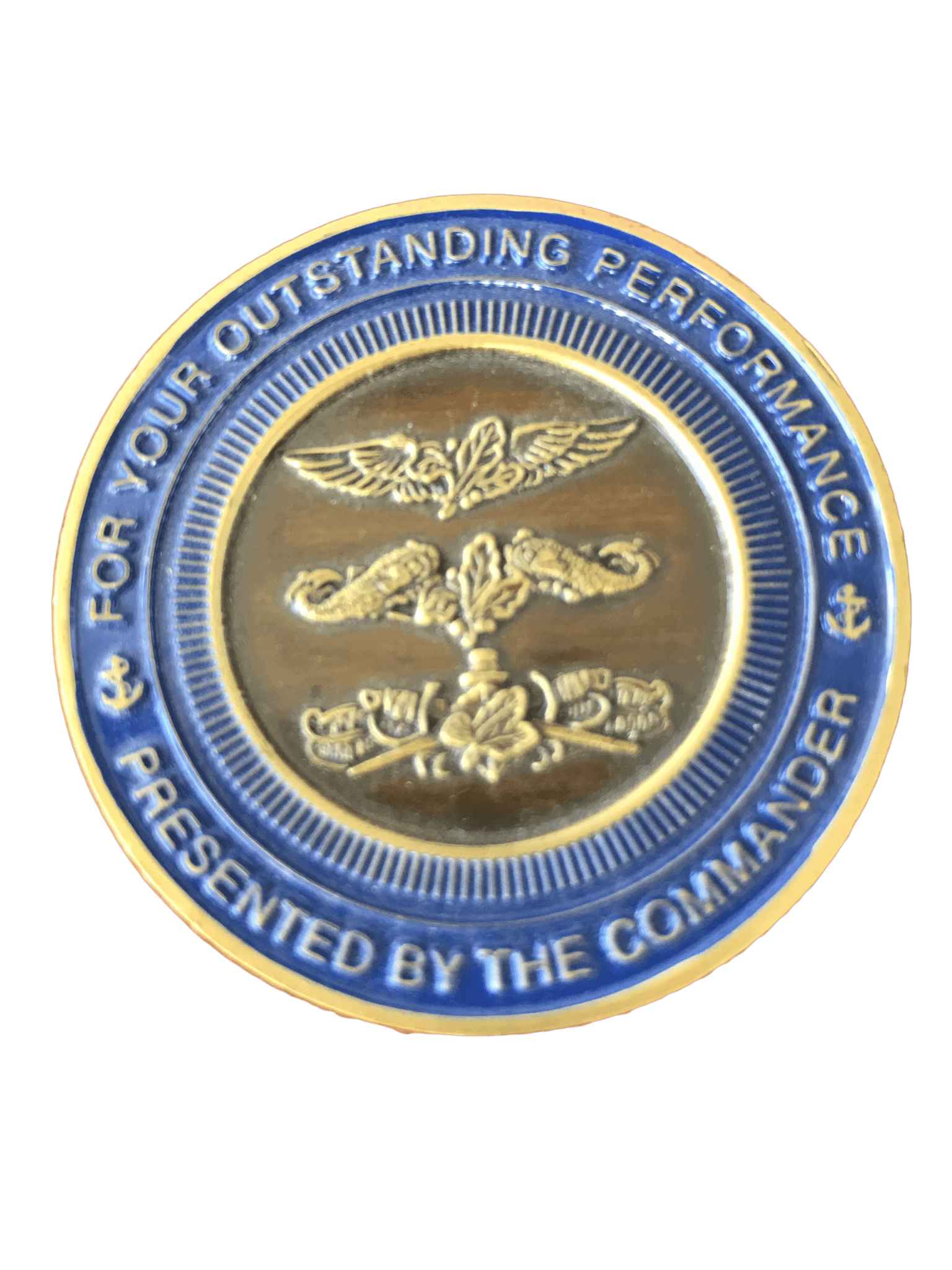 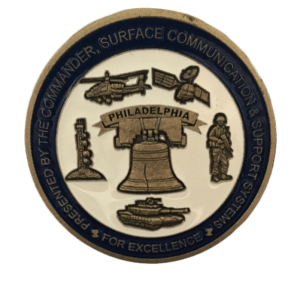 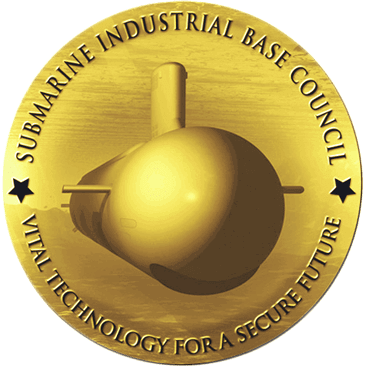 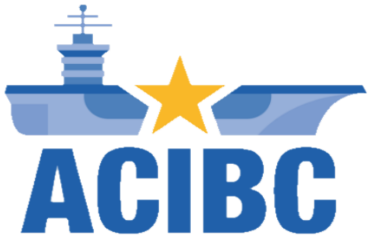 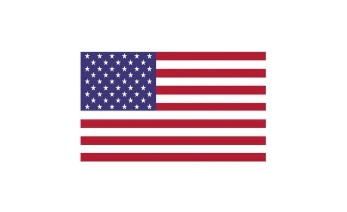